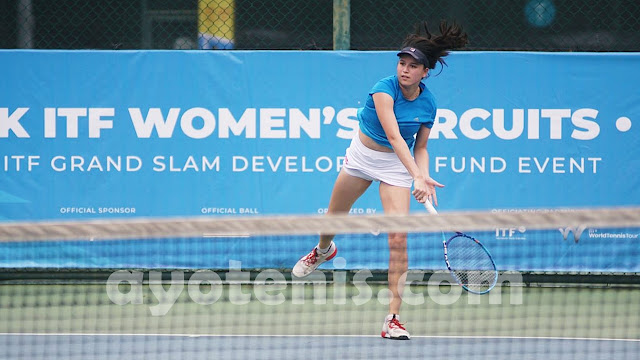 Jakarta, June 17, 2019 – The Secretary General of the Indonesian Tennis Association Center Management (PP Pelti), LaniSardadi, together with MillaSuciyani,Corporate Brand ManagerPT Pertamina (Persero), today officially opened the 25K Women’s Circuit Pertamina Tournament, which will take place from June 17 to 23, 2019, at the Elite Club Epicentrum in Jakarta. Female athletes who accumulate enough points on the Women’s Circuit are eligible to enter major tournaments in the Women’s Tennis Association.


The tournament, included in the annual calendar of the International Tennis Federation (ITF), is an important event for athletes who, if they accumulate enough points on the Women’s Circuit—better known as the ITF World Tennis Tour—are then eligible to enter the major tournaments of the Women’s Tennis Association.

The names of Indonesia’s female tennis players who will compete in the Women’s 25K Circuit  Pertamina include, among others, Aldila Sutjiadi, Jessy Rompies, Beatrice Gumulya,Rifanty Kahfiani, Fitriani Sabatini, JoletaBudiman ,Deria Nur Haliza, and Nadia Ravita. They will compete on hard courts for total prizes worth USD25,000.

“This tournament is one of the events in the series of Pelti campaigns to improve Indonesia’s tennis achievements at the international level,” said LaniSardadi. “With the support of Pertamina, we hope it can generate inspiration for female tennis athletes to be able to continue developing and to contribute to their best achievements to make the nation proud in international tournaments,” Lani added.

There is also something unique about the tournament this year: namely, the launch of the Tennis Kids Festival, which will be held as part of the closing of this year’s Women’s Circuit. This event consists of meetings with Indonesia’s female tennis athletes and free training for children aged 4-12 years given by Indonesian flagship tennis clubs including the Jakarta International Tennis Academy, the Sportama Institute, Mirai, the Lucky Tennis Academy, and Bunge Nahor Tennis. This is expected to be an inspiration for a new generation of Indonesian tennis players.

“As a Platinum Sponsor of the 25K Women’s Circuit event, of course we are proud of Indonesian women’s tennis achievements in international matches, and we want to continue to see athletes bringing home medals for our nation,” said Fajriyah Usman, VP of Corporate Communication at Persero. “Pertamina fully supports the efforts of Pelti to promote tennis as a sport in Indonesia.”

Female athletes from various countries are participating in the Pertamina 25K Women’s Circuit this year include athletes from other countries in Southeast Asia; namely Singapore and Thailand. There are also tennis representatives from countries in the Europe; namely, Britain, the Netherlands, Russia, Croatia, and Turkey. Participants also include players from the United States, Mexico, Japan, Australia, and New Zealand, all of whom will fight for the best position and prestigious places in the ITF ranking.